It was just an "encounter" not a real fight. Only killed one PC and flew off with their body.

It was just an "encounter" not a real fight. Only killed one PC and flew off with their body. 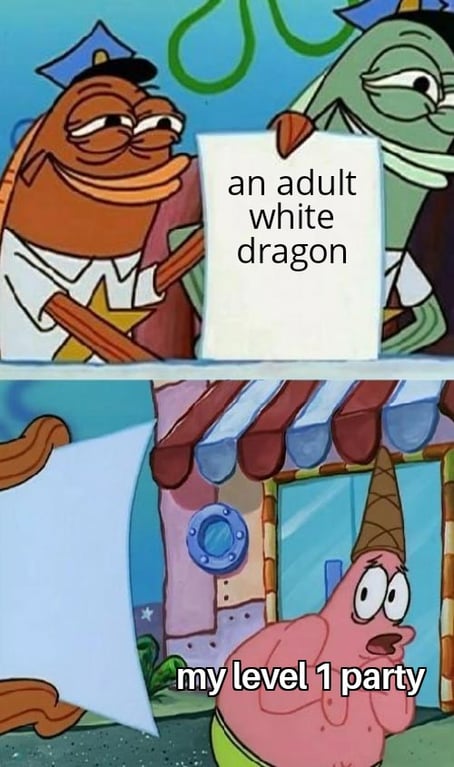 Admit it, you just hate the player.

Either you talk about it while they're creating the character or you let them play whatever the hell they want. You don't just kill of a player's character because you don't like them.

Your post/comment has been removed because your account is less than 12 hours old. This action was performed to prevent bot and troll attacks. You will be able to post/comment when your account is 12 hours old. *I am a bot, and this action was performed automatically. Please [contact the moderators of this subreddit](/message/compose/?to=/r/dndmemes) if you have any questions or concerns.*

And here we see the Bad Dm in his natural environment. Observe as they permanently kill a PC and then makes fun of them on reddit. Nature truly is terrifying.

What an epic own. I'm sure fun was had all around as the PC was killed out of the blue by a creature they had no way to defend against. I love DMing because it lets me unleash my ego to it's full extent. Jesus Christ, some people...

So, throw a unwinnable, inescapable encounter at the level one party, kill a member, then make absolute certain the character can never be revived?

Well, maybe it has something to do with the plot. But yes, the killing should be avoidable.

Naw. Dragon of Icespire peak with a lot of homebrew. Didn't actually kill anyone, just swiped a PC as it flew by and it ate a cow before flying off. I was setting up the threat they had to overcome. Worked pretty well actually.

Yeah I did the same thing with that campaign, but made 100% sure none of the players would be at risk of death.

I was ready to fudge any nat 20s. Was aiming for "near death experience" not the rest of this comment section.

To be fair, you said in the title that you killed a PC and flew off with their body. If you'd said you didn't actually kill anyone, I doubt you'd be getting this hate.

I forgot what being satirical on the internet was like. I made my bed. I'll lay in it.

I don't think the word 'satire' means what you think it means.

I think he means exaggeration but either way I think he's just changing his story to cover his ass.

Hahaha! How is that satire? I don’t Think you know what word means. And you didn’t ‘lay in the bed you made’ I don’t think you know what that analogy means. you clearly changed your story to avoid more downvotes. Bad Dm, no upvote for you.

satire ? satire of what ?

I have a campaign opener idea where they get TPKed by an undead dragon just so I can revive them as undead servants to a litch or similar powerful undead. My fun idea to start an undead campaign.

That does sound fun, but how would you make sure the players won't be pissed off when it happens before they realise the plot twist? Would facing facing impossible odds give a hint to players that is supposed to happen?

Almost killed my level 1 players with a young dragon.

Because you're FAT, boy!

Well yes, but has that got to do with anything?

Guess you aren't familiar with [this masterpiece](https://youtu.be/oiuyhxp4w9I)

I hope your players talk over you.

I hope your players leave, I'd never wanna play under you.

Did they have a chance to run/hide?

Would an adult white be doable for 4 level 6's? Currently DMing a woven together LMOP & DOIP campaign and was thinking about making cryovain an adult since 1 apparently he's an adult when he flys away from storm kings book and 2 another friend ran myself and some others through Doip and we wiped the floor with the young white version so I wanted to make the fight a bit more memorable. I'm tied between making him an adult and maybe just giving him adult health. First time DM too, so I really want to make sure it's fun for them so I don't ruin the whole experience.

Really depends on party comp, a little luck, and also a loooot to do if they fight it in its lair. Lair actions are scary. I've been DMing for 5+ years now, and my table is a bit larger (6+ PCs. 6 always, and sometimes guests. Does not include me/NPCs, but I rarely have NPCs fight unless they are trying to tackle something super early.) But I make my baddies' health variable. Smaller monsters I usually keep the same, just throw more at them, but single larger creatures (a dragon, for example) would just lose out on action economy alone. I never make them deal more damage, but often times I do beef up their health, just because the fight would be over way too quick to pose any true danger. Do whatever feels right though, if you say it's close to dead, and someone crits it, and it was already passed its normal health, then I might be more inclined to give them the kill. Have a number in mind, but do what *feels* right!

Also something to note, being a dm comes with a lot of failure. Trying to make a memorable encounter may either wreck a party or be too easy. It happens. just be cool about it. Say like, “ok screwed that one up. Next time it’ll be better.” As long as you’re trying to work with the players, and they see that, it’ll work out.

Apparently no one here has run DOIP or knows how to take a joke, it's really a Young White Dragon and important to establish hatred for Cryovain as the BBEG since the plotline of this module is non-existent. Relax haters

Gotta put the Dragon in Dungeons and Dragons somehow lol

I dont believe him, i think he's covering his ass because of the backlash

Makes sense, thats not the sorta thing you put as a title unless it actually happened. as any dm with a brain would be ashamed that it happened within their game .

This is a meme subreddit, you guys are wack

This isn't a meme. Shit like this actually happens

I appreciate the defence here and I'm glad you personally picked up on the humour, but yeah. I'm not going to edit anything I said or try to defend myself. It was a joke that the D&D meme community obviously did not like. I was hoping by being extra flippant about things it would tip off others it was a joke, but I think a lot of people probably actually had bad situations like this happen and might be sensitive to it. My bad.

Action equals reaction. Cause equals effect. There is just as much causality if not more for a DM when making these sorts of choices. What did the players do to warrant such an effect. If nothing than balance becomes unbalance and there needs to be an action to right it.