An Outcast In Another World - Book 1 (Human Insanity) is now available on Kindle, Kindle Unlimited, and Paperback!

An Outcast In Another World - Book 1 (Human Insanity) is now available on Kindle, Kindle Unlimited, and Paperback! 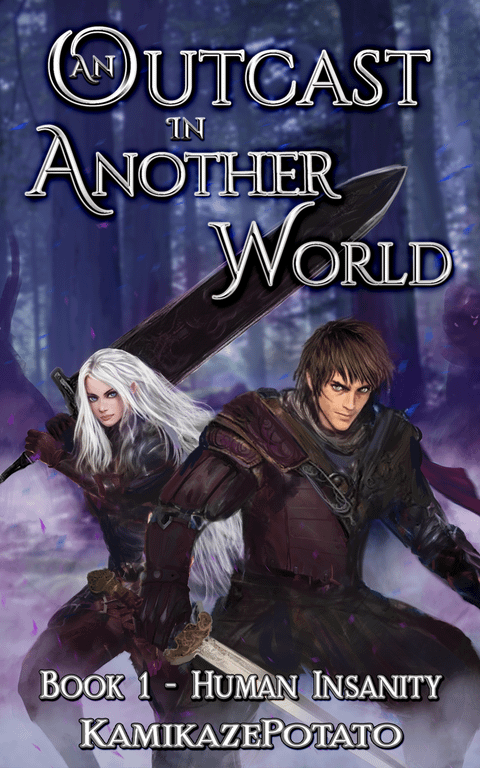 I’ll check it out. Thanks for adding the bit about a his build. For a genre where the characters advancing through the magic system is one of the main draws, a lot of authors forget to add that in their pitch.

**Amazon Story Page Link:** [https://www.amazon.com/dp/B09FZ16ZNT](https://www.amazon.com/dp/B09FZ16ZNT) **Story Description:** Rob didn't think of himself as anyone special, but when a pitch-black portal tried to wrap his best friend in chains, he stepped up without thinking and found himself ensnared instead. His moment of heroism results in being torn away from everyone he knew and loved, kidnapped by an unknown force that leaves him with a note in his pocket stating: “Good luck.” After being thrown into the wilderness of Elatra, a hostile fantasy world ruled by levels, stats, and bizarre video game logic, he finds himself entirely out of his depth. Armed with nothing but a sword and the clothes on his back, he sets out on his the first day, and almost dies. On the second day, he almost dies again. On the third, he began to notice a worrying trend. And almost dies. It doesn’t get any easier from there. Overcoming the wilds is just the first step in his journey; the society of Elatra is incredibly hostile to humans, having just come off of a devastating war that left over half the population dead, and getting the locals to trust the last human in existence is a struggle in and of itself. Between being powerless in a world that hates him and suffering under a System that is altering his mind in unwanted ways, Rob quickly finds that monsters aren’t nearly the biggest thing to worry about. As far as LitRPG isekai adventures go, Rob drew the short straw in many ways. But that’s okay – all the bullshit in the world won’t keep him down. He'll carve out a place in this world with his bare hands if necessary. He'll survive, and then he'll *thrive.* Whether anyone wants him to or not. – Author's Note: An Outcast On Another World puts a great focus on story and characterization, making it perfect for fans of traditional fantasy stories, while still including plenty of skills, stats, classes, magic, and progression for LitRPG-lovers to enjoy. The LitRPG elements are incorporated into the main story to construct a cohesive world that's easy to immerse yourself in. Rob's progression is weak to strong, and victories aren't handed to him on a silver platter. Circumstances force him to focus on Vitality over his other stats, slotting him into the role of a durable frontline fighter who gets injured and maimed on the regular, constantly pushing forward no matter what bullshit gets thrown at him. And no matter how powerful he gets, mid-combat ingenuity is essential to achieving victory. The book contains dark elements to its narrative, but I've included appropriate humor as a balance, and many readers have told me that some parts made them burst out laughing while other parts tugged at their heartstrings. I truly believe that I've constructed a memorable fantasy RPG story that all types can love, and that you'll enjoy reading it as much as I enjoyed writing it.

For how poor this is written, I can't

Pls explain. I wanna know if it's worth reading.

I like the story itself, it's one of my favorite royal road stories rn.

I mean the story description. It's terribly written

Not that bad, I've seen plenty worse in the world of webnovels...

Thanks! Been a long road to get here.